On Monday night I woke up screaming from a nightmare. It was of the kind I’d had a few times before, but it doesn’t happen very often. There’s a light., or lights in the sky, and I don’t want to look upward because of what I might see. When I was younger, the dream would have me falling into the sky.

I woke up, at 11:15pm, with the sort of yell that feels part of the real world, but’s still in the dream. Nothing was out of the ordinary, I got back to a fitful sleep.

In the morning I checked Facebook. And there in the MUFON1 group was a sighting filmed from just up the road a bit. A stationary light seen from Kirkcaldy, sometimes flickering, sometimes steady, in the direction of… right on my damn doorstep.

Right at the time I woke from the nightmare about a light in the sky.

They say that if you take an interest in the supernatural, the supernatural takes an interest in you. I’d just written a book on UFOs. It was inevitable, the perfect segment for Blaze TV, maybe Spooked Scotland if the subject was slightly different. But now the question was what just happened? On the surface, this was a tidy little mystery. I thought a rescue helicopter at the cliffs could explain it, but Flightradar24 didn’t show any. An aircraft on final approach into Edinburgh was also filmed, to show the difference.

Someone on the group suggested a torch.

Well, maybe. Someone on the beach pointing a powerful torch upwards into the clouds didn’t seem a bad idea, with different flashing modes. Why would that wake me? But that evening, wanting to get some proper, non-supernaturally-tinged sleep, I took a closer look at Flightradar24. It has a playback feature, so I watched a replay of speeded up aircraft movements. 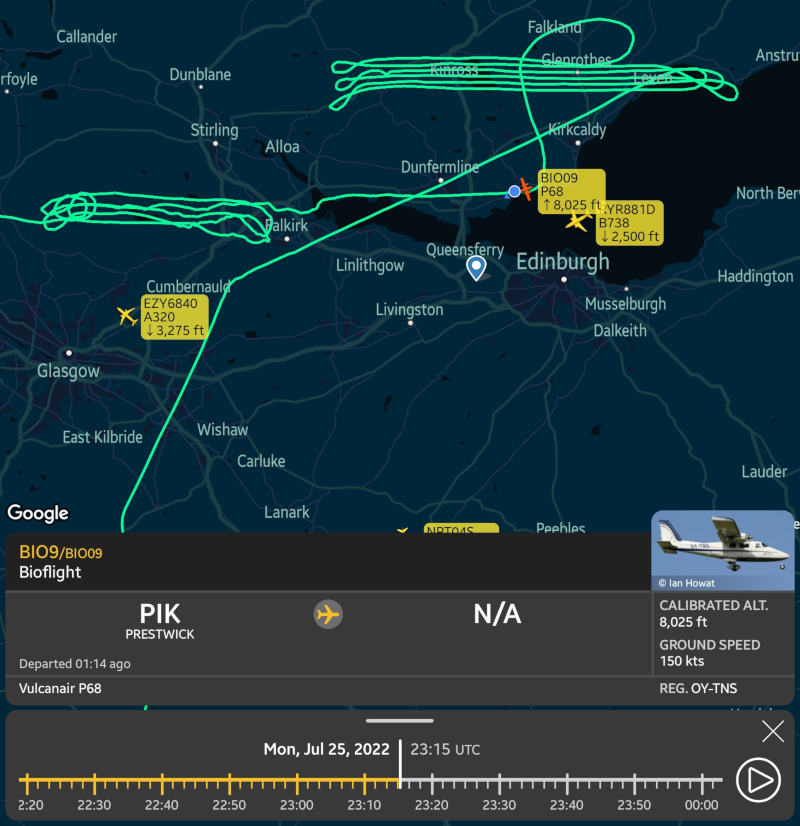 Just look at that! A Vulcanair P68 was doing racetracks in the area, a number of times flying straight towards Kirkcaldy where it was filmed. Being head on, it would seem to hover. Best of all, it was right above my house at 8000ft at the very moment I woke from the nightmare. Not only that, but I had the curtains open, and had I opened my eyes lying where I was, it’s lights would have been coming right at me; the angle was perfect.

The supernatural isn’t taking an interest in me quite yet.