Lettering speech bubbles – balloons as they prefer to call them in the US – is often an afterthought for an indie comic. When I wrote the script for Archangel I realised that offering to letter the comic would give me a further pass at tweaking the script.

Bryan would often improve on the layouts I described, and in response I updated – or even removed – some dialogue to match. Besides, it saved further rounds of passing finished artwork back and forward.

In any case, I was hooked. And it was time to look into the artform – because it is an artform – of lettering. Fortunately there were some excellent resources. 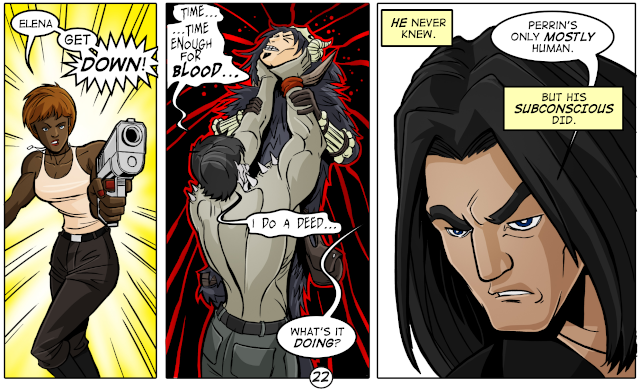 Up until now I was using Manga Studio Ex 5. So just to prove I could do it, in the next project I figured on using entirely open source software. No purchase cost. No monthly fees. A combination of Inkscape for lettering and Scribus for typesetting proved to have many advantages. Not that there was anything wrong with Manga Studio, just that the desktop machine which ran Inkscape was… faster. (And while I have a Mac or two I can do all this with, I’m a diehard Linux fan…

Now, instead of mainly ovals, my balloons were created using splines. And there was something about Inkscape which just felt more natural to me. Having made a US comic sized page template to speed up the process, I was off1. In fact using Scribus felt like coming home. Back in my games industry days in the 90s, I designed and typeset instruction booklets using Quark XPress2. Scribus felt reassuringly familiar.

Most recently I’ve begin work on Osiris: Origins, again using Inkscape and Scribus. I export the lettering layer separately from the underlying art, combining them again as layers in Scribus. The advantage of keeping them as different layers is if and when any changes need made. Should the art be updated, it’s simply a case of saving the new version over the original. Scribus updates accordingly and we’re done; no need to import into Inkscape and export the combined art and dialogue all over again.