Slightly freaked out at the moment — but only slightly — having just experienced an utter doozy of a co-incidence. Everyone has one of these at least once in their lives, and this is mine. 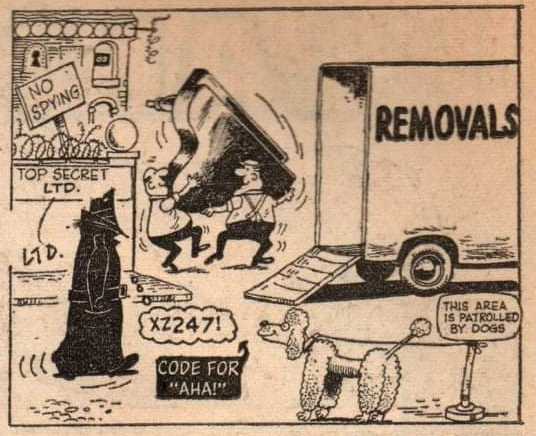 As part of one my my side-projects I’m investigating a story1 where a mysterious explosion, and strange object crashed, happened just off the Isle of Lewis in 1996. It’s mysterious because nothing was supposed to be there, no wreckage was found, and nothing was reported missing.

Well, no wreckage from the right time. A helicopter crashed in the area in 1982 and parts were recovered, but obviously had no connection to the 1996 event. Today I found a newspaper item which had the helicopter’s tail number: XZ247. And so I added that to the story.

A few hours later I’m scrolling through Facebook, I see someone’s posted an old Sparky cartoon from the early 1970s, I, Spy. A few panels in and there’s a thought-bubble. “XZ247 (which is code for AHA!)”

What? How is that possible? That those sequence of characters exist independently in two contexts is perhaps not so surprising.

But to encounter both of them within two hours of each other… eep!