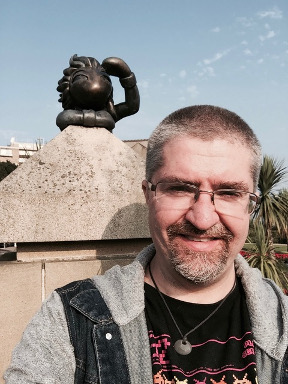 The Kingsway Amateur Computer Club was where it all started. I turned up sometime in 1983, perhaps 1984, with my new Commodore VIC-20 and met like-minded people. Some of us became lifelong friends. Here was where some of us decided we wanted to make computer games for a living, which culminated in Dave Jones founding DMA Design in 1988.

I was employed by DMA as a graphic artist, though in truth my job seemed best described by the term ‘miscellaneous’ more than anything else. Eventually I settled around writing text for the games. Whether this was words in between game levels to keep the player’s attention or writing an entire background for a world, this seemed to be my specialty.

Highlights of my time in the games industry include creating the story, characters and background for Hired Guns in 1993 which even now is good enough to get drinks bought for me. Another is the manual for Uniracers (described by Arstechnica as “…goofy and hilarious…” and by Nintendo Life as “…refreshingly irreverent and zany…”).

A non-game-related highlights was having a radio play, The Long View, broadcast by Radio Tay in 1992.

My favourite claim to fame, from this period, is having my name in paragraph one, page one of the original Grand Theft Auto design document . I even did a dialogue rewrite for a few months, though my main focus was another game, Body Harvest.

I took a short decade and a half break to work in the aerospace industry, coding instrument control software in the engineering department, finally getting a chance to use the knowledge I went to (what is now) Abertay University for. Now, however, I decided the time was right to be a freelance writer, and finally write all those novels I had been dreaming up since the beginning.