It’s every Science Fiction writer’s dream to have successfully predicted the future.

I did that once. But there’s a wee caveat. 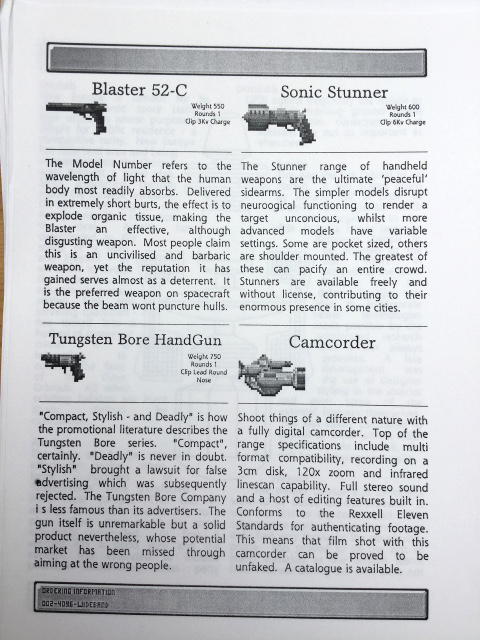 Schneier on Security had a post a few weeks ago about ‘Proof Mode’ for smartphones. This is a way of adding data to a photo to prove that it hasn’t been altered. I predicted image authentication cameras in the Amiga game Hired Guns when I wrote the manual in 1992.

One of the in-game items was a camcorder which could prove the footage was authentic. Here’s an image of the page in question. I’ll note that I had it recording onto a disk, though. Not quite a precise vision of the future, but close enough, so I’ll claim it.

Now, if you happened to own Hired Guns, one thing should give you pause: that isn’t a page from the Hired Guns manual. And the camcorder didn’t appear in the game. That’s the caveat. It’s a page from the unseen original version of the manual which I typeset myself in-house at DMA Design.

It wasn’t quite finished, but I’d made great progress. All the text was written, the graphic assets existed. All that was needed was to turn it into page layouts. Psygnosis, the game publisher, decided that to save time (spoiler: they didn’t) the whole thing would be typeset by a third-party. So that’s why the final manual doesn’t look like this page.

The other unfortunate thing was that we ran out of memory and the story had to be drastically changed.

A simplified story meant a simplified plot and some assets, such as the camcorder, couldn’t fit in. At the time I fretted about the new wave of special effects in the world. The Running Man had a memorable scene where footage was faked. Couple this with the remarkable fact that 3D software was being given away on Amiga cover disks, then how could one possibly know what was real. The original story in the game required the characters to escape with proof of the truth behind the world they found themselves in.

So, for completeness, I came up with the idea of a camera where you could prove the footage was real.

And now, 25 years later, it seems, you can buy such a thing.