Something wonderful has happened! Your Amiga is alive!

Well some of them are. The old guard has never given up on the best home computer ever made, including myself. A new print Amiga magazine – Amiga Addict has recently been released and they’re now on to issue 2. Editor Ravi Abbott asked me to contribute some interview questions about DMA Design and I’ve now seem the proofs. Excellent job!

I said I was most known as the Retro Gaming guy, and this kind of proves it. Even decades later, people still want to hear about Lemmings and Grand Theft Auto. But in those pages something caught my eye.

Mention is made of the rumour that GTA was originally started on the Amiga, which – spoiler! – we refute. Interestingly, this apparently comes by way of someone who DMA once interviewed. This guy showed us an Amiga game demo, and who later claimed we ripped it off to make GTA. A claim that Rockstar apparently settled out of court1.

This is interesting to me for a few reasons. Not least of which I was around at the time. As part of DMA’s Design Department, and as writer of the newsletter as well, I was in a pretty good place to see a lot of the process of games development.

I’ve written before about how the evolution of games is rarely a brilliant, singular “moment of creation” where the entire product is envisioned, fully formed, in the white hot heat of brilliance. Usually it’s an organic process. Ideas are mooted, discarded, modified, trimmed, bolstered, abandoned, ressurected. And that was the case with GTA.

The first mention of the GTA project, where the game was conceived, was a newsletter entry in Jan 1995 titled “New PC Project”. It had almost no details, because the meeting it referred to was inconclusive. The idea was that we needed a PC game because the development costs were lower than for consoles. No license required for PCs, after all. They met a few weeks later with better results. We were going to make something called “Race ‘n’ Chase” which evolved to become GTA.

But we’d already had car racing games on the go.

Back in 1990 we’d had a 24-hour “crunch” for charity – ITV’s Telethon – where we made a game whimsically called Super Offroad Hot Turbo Buggy Simulator, a top-down car racing game. So if nothing else these concepts were in the air at the time. In the “old, old office” where I worked, I remember playing a Commodore 64 game called Siren City, a top-down car game with cops. How about cops? Were cops also “in the air” when GTA was created?

The January newsletter, the one before New PC Project, relates the story of the Grand Canyon. A group of us were attending the Winter CES in Las Vegas in 1995. We decided to hire a couple of cars and take a side trip to the Grand Canyon. The other car sped ahead. The one I was in kept to the speed limit. But we passed them a short while later: they had been pulled over by cops for speeding. As we drove past, I got a photo of the event. And this was few weeks before we needed to start throwing ideas around for a new game. 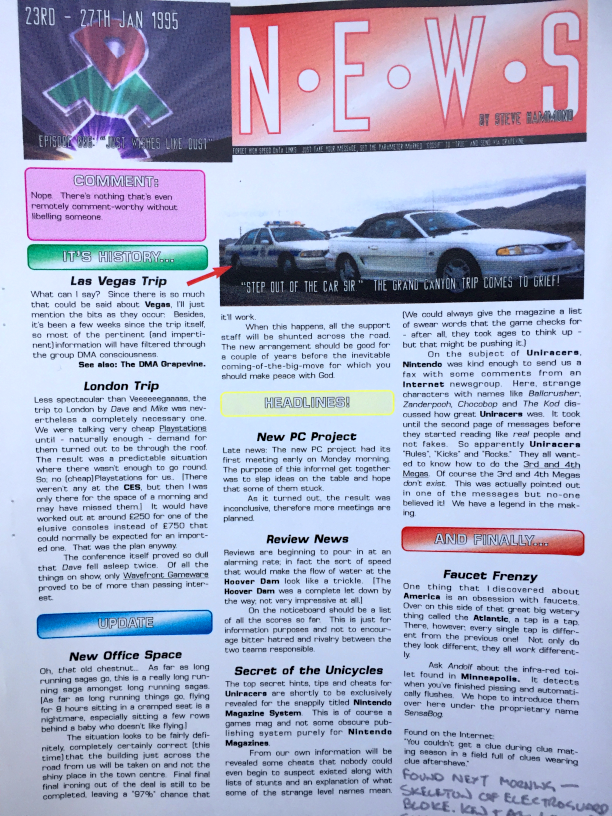 Car games and cops were one thread.

Another thread was the connection between DMA’s first games, Menace and Walker. It’s fairly common knowledge that one of the baddies in Menace became the basis for Walker, a mechanical fighting machine on legs. Less well known is the project which followed it: Atomic Battle System. This was an ultimately doomed project to make a kind of “super-walker” game. But for various reasons, including the departure of key team members, the project crashed and burned. What does this have to do with GTA? Well the remaining team was now at a loose end so as a kind of emergency project they created… a car racing game.

This game was called 4x4 and was a top-down racing game, with radio controlled cars. 4x4 had already had a previous incarantion as a possible car racing game but from a side-on perspective. This was mooted in October 1993, coincidentally the same month that another of my DMA Newsletter presented the results for a search for ideas. In a sidebar I wrote about the response. Most of the conversation in the Design Department coalesced around car racing games. (One suggestion was Daschund Racers!) But another side-scrolling racing game was already in the works, codenamed 1x1 which ultimately became Uniracers.

One other suggestion in that October 1993 newsletter stands out hugely, in retrospect: “A drug dealer and joyrider game”. And this was a few months before the interview of the guy with the Amiga demo.

All of which is quite aside from another thread, which is the various technology demos Mike Dailly created, that would become the graphics engine for GTA. Even there you can see the different ideas being tried out. One was 3D isometric, one was top down. But that’s a blog post all by itself.

And so that was where Grand Theft Auto came from; loads of places.